In the former article I talked about Shutter speed, Aperture and ISO. Now we reached the point to find out how they're connected.

In this article a little on F-stops, freezing motion and shooting with little light.

Every lens has a maximum lens opening. How large that opening is on the lens you are using is printed on the lens barrel. You should find something like 1.8/50 or 3.5-5.6

Doesn't make sense? Well, you only have to remember the first two of them (1 and 1.4) and double them alternating:

And then simply merge the two rows

Every single step between two following numbers in the range is called a stop or an F-stop.

Ok, so far the numbers. What is the effect of an F-stop?

Well, every time you stop the aperture down, that is: you go one step up in the range, the amount of light that is allowed to travel through the lens is halved.

Every single step between two following numbers in the range (from left to right) halves the time in wich the sensor is exposed.
Sounds familiar?

Yes! Every single step is one stop!

In some cases you want to freeze motion. A sportscar driving by, you pan with your camera and sure you want to get the car sharp! The background doesn't matter. In this case you need a high shutter speed (1/500 or higher). So you decrease the shutter speed, but, in order to catch enough light, you increase the aperture.

To make it clearer to you a little example:

You want to take a portrait shoot. You get your camera and point it to your model. Metering tells you you need a shutter speed of 1/30th of a second and an aperture of f/16.

1/30th of a second is a long time to hold your camera still. Even with image stabilisation. Let's say you've mounted a 50mm lens, you want a shutter speed of 1/60th of second or faster (why? I'll explain in another article). From 1/30 to 1/60 is 1 stop down. To get enough light you'll have to increase the aperture with, yes, 1 stop. So you'll set the aperture from f/16 to f/8.

In the example I let you open up the aperture with one stop. But what if it is too dark to take a picture at f/8?

Here the ISO comes in. The higher the ISO, the more sensitive the sensor (or film) will be to the light exposed to it. And, yes, there is a typical range for ISO numbers:

I don't want to spoil anything but: every step between two following numbers in the range doubles the sensitivity of the sensor. And, yes, every step is 1 stop!

So, in the former example, you should shoot at 1/60th of a second at f/8. But your camera tells you the shutter speed or the aperture will not work because it's too dark. You're at ISO 100. Why don't you give it a try at ISO 200?

As you would have noticed the range of ISO works the oposite way compared to shutter speed and aperture. I kinda like it though. It makes the Exposure Triangle possible! 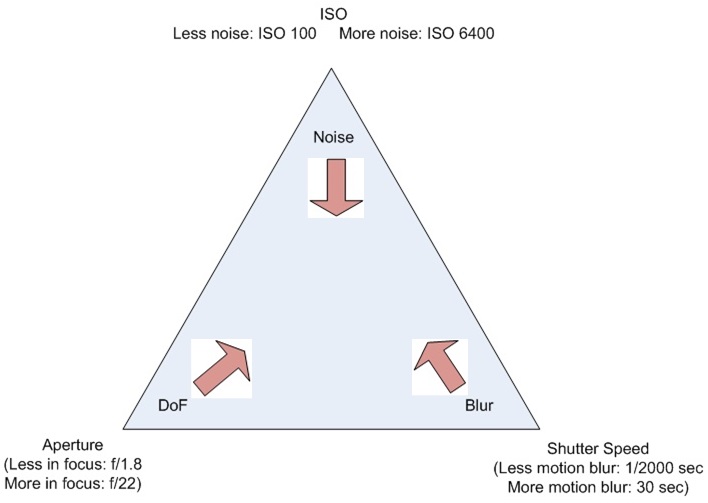 I hope you liked this article.

If you want to stay tuned, please subscribe to my newsletter. In the form below you can leave comments and questions.

For now: Have a good one and use the light to write!